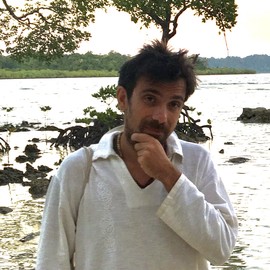 After his Ph.D (Pisa, 2008), Filippo Bonchi has been ERCIM fellow at CWI (Amsterdam) and École polytechnique (Paris). From 2010 to 2017, he worked at École Normale Supérieure (Lyon) as CNRS researcher. In 2018, he moved back to Pisa as Associate Professor. His research interests stand in the meet of Logic, Algebra and Theoretical Computer Science, with particular focus on Coinduction, Coalgebras, String Diagrams and, more generally, Category Theory. He contributed in a large variety of topics, including Automata Theory, Programming Languages, Abstract Interpretation, Algorithms for Model Checking, Data Bases and Relational Algebra and, more recently, the compositional study of Dynamical Systems (such as Signal Flow Graphs, Petri nets, passive and non-passive Electrical circuits). He regularly serves as PC member in top-class conferences of Theoretical Computer Science and has been chairing the Conference on ALgebra and COalgebra in computer science. His paper “Hacking Non-Determinism with Induction and Coinduction” appeared as cover story for Communication of the ACM.