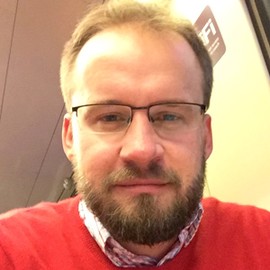 I am Professor of Trustworthy Software Technologies at Taltech. The position is a research measure of the IT Academy programme, funded by the Estonian State and the European Social Fund. I lead the Laboratory for Compositional Systems and Methods.

My research can be understood as the study of how to connect open systems (of various kinds: programs, networks, computing devices, circuits, …) in a way that the description of the connections–i.e. the language that we describe subsystems and how to compose them—is compatible with the behaviour of the system. Therefore, what can be observed of the global system is entirely derivable from the observations made of the component subsystems. This is because each composition operation in the language we use for describing systems gives rise to an analogous operation on the behaviours. This property is known as compositionality.

I focus on compositional modelling of systems, developing the underlying mathematics (usually category theory), and applying it to real-life problems such as verification. I work on graph transformation, Petri nets, process algebras, dynamical and cyberphysical systems, as well as mainstream concurrent programming. Since 2015, I write the Graphical Linear Algebra blog about rediscovering linear algebra in a compositional way, with string diagrams.